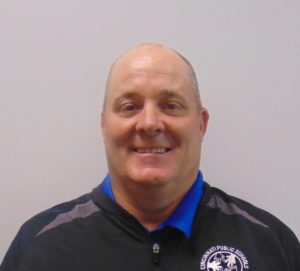 Jeff Wiles joins Activities Beyond the Classroom as the next Athletic Director at Clark Montessori High School.

Wiles received his bachelor’s degree in Marketing and Management at Otterbein University where he participated at the varsity level in football and track. Wiles spent his first 25 years in the business world holding executive level positions in marketing and management.  He returned to the sports world in administration and coaching roles starting in 2010 when he joined the Sports Commission at St. Mary’s.  Wiles went on to become the Executive Director of Knothole Baseball, the country’s oldest youth baseball program.  His coaching experience has been at all levels in youth sports for both boys and girls.  He held coaching positions at Walnut Hills High School in football and baseball and, most recently, as the Head Varsity Coach for Girls Fast Pitch Softball.  Wiles joined the Cincinnati Public Schools’ Athletics team in 2016 when he began working as a Sports Coordinator for Baseball and Softball.

“Jeff joins a strong team of nine athletic directors at ABC, and is the right person coming in at the right time to take Clark athletics to the next level,” said Brian Leshner, Executive Director for Activities Beyond the Classroom. Hardin added, “Jeff is a program builder and very detail oriented, and he will thrive in this position at Clark Montessori. He has put in endless hours to grow the sport of baseball and softball in the city, and I know he will bring that same energy to Clark. We look forward to helping support him and to the growth of Clark Athletics,”

“I want to thank Josh Hardin and his team at CPS Athletics for embracing my vision and supporting me every step of the way over the past two years. I believe we have laid the foundation for CPS baseball and softball to continue to grow participation levels and provide  great experience for our student-athletes,” Wiles said. “I look forward to continuing the efforts put forth by the previous Athletic Directors and building on what they have already put in place. I’m looking forward to being part of the Montessori Triangle of Education — students, teachers and parents — working together to prepare our student-athletes to become contributors both on and off the field, and to contribute to society after they leave Clark Montessori.”

Clark Montessori is the nation’s first Montessori high school, which has been nationally recognized for academic excellence. The school is best known for its field studies and intersessions, community service as a method for learning about the world, thematic work emphasis, seminars, and relationship building for grades 7-12.  The student body is culturally and ethnically diverse, with students attending from every urban neighborhood in Cincinnati. Clark Montessori Athletics offers more than 43 teams in nearly 21 sports with over 400 student athletes, and the athletic department at Clark is managed through a long-standing collaboration between Activities Beyond the Classroom (ABC) and Cincinnati Public Schools.