Alpha Delta Boule is a national non-profit organization, with a local chapter that is heavily involved in helping students at Cincinnati Public Schools through various programs and opportunities. Alpha Delta Boule has been very active at Winton Hills Academy over the past few years, forming a strong relationship with Shelby Zimmer, ABC’s Resource Coordinator at Winton Hills.

In Cincinnati, the name Jim Anderson is commonly associated with the Bengals, given his 29-year tenure as the running backs coach. However, since retiring, he works tirelessly with the Cincinnati chapter of Alpha Delta Boule. Coach Anderson has been an incredible advocate for the students of Winton Hills Academy, showing great dedication to the students and families in the area.

This connection between Shelby and Coach Anderson has created numerous opportunities for students at Winton Hills, such as Donuts With Dudes and Muffins With Mom events, the Achievement Behavior Consistency Awards Ceremony, providing students with the opportunity to attend the Men of Honor Ceremony, leading a coat drive for students in need, and many more endeavors that benefit the students, families, and community of Winton Hills. 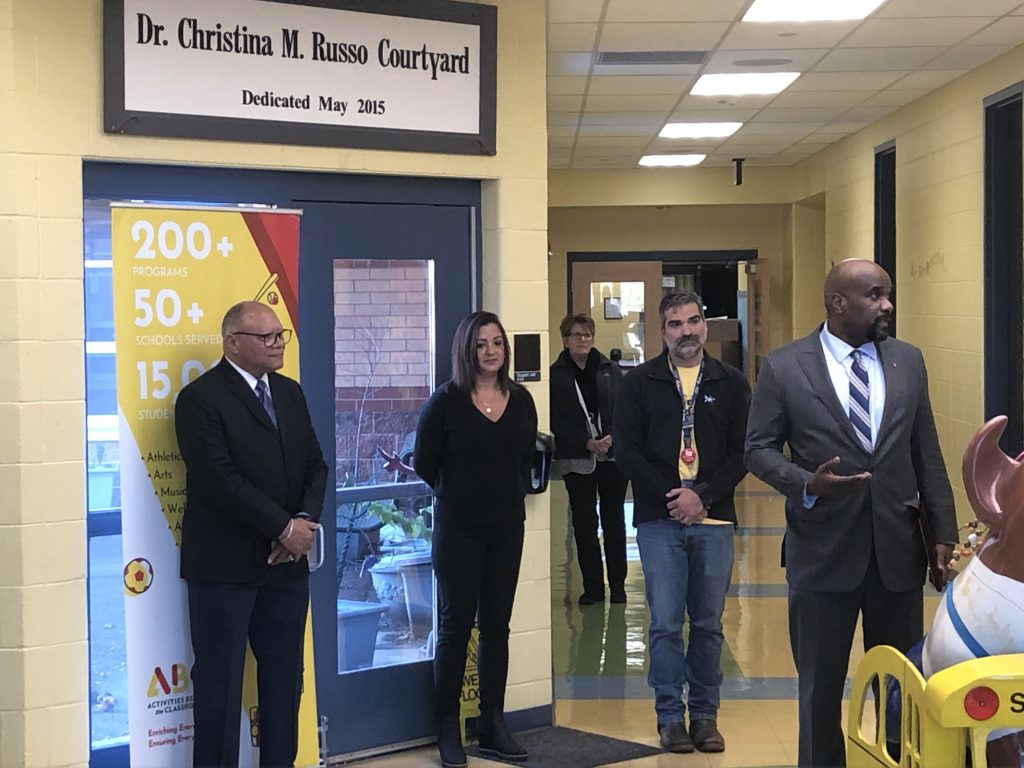 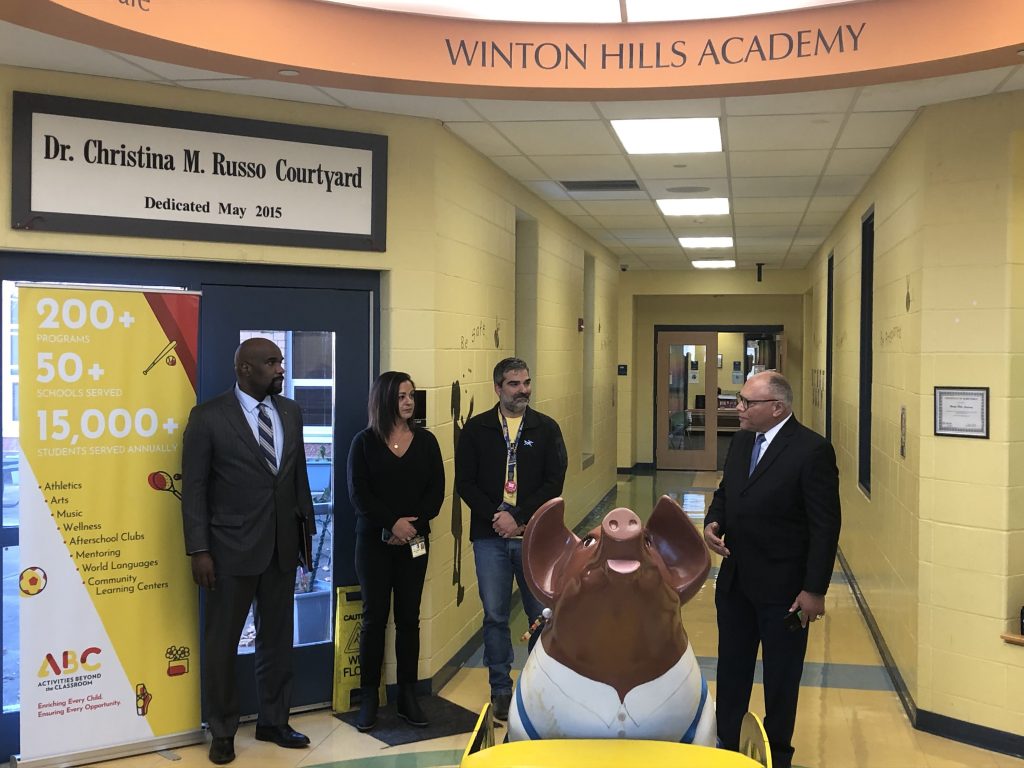 Coach Jim Anderson gave an introductory speech, welcoming the audience and thanking them for their attendance. Coach Anderson pledged Alpha Delta Boule’s support of Winton Hills, making sure everyone in attendance knew that this adoption is more than just a display, but a vow that the Alpha Delta Boule will do everything in their power to support Winton Hills for years to come.

Following Coach Anderson’s introduction, Attorney Parker addressed the audience, speaking of how excited he is to try and reach students at a young age, and provide them with programs that instill hope. Attorney Parker said that in his work, he sees that many of the troubled individuals face socio-economical conditions that impact their ability to achieve a quality education. Because of this lack of education and lack of opportunity, too many times students lose hope.

Attorney Parker stressed that the staff in attendance are community problem solvers, helping to keep students focused and motivated to pursue their education. He also stressed how important it is to keep the students from losing hope, and “keeping the light from going out in their eyes.”

Attorney Parker then presented a plaque to the faculty at Winton Hills, with ABC Resource Coordinator Shelby Zimmer on-hand to accept the honor. The commemorative plaque is on display in the main atrium of Winton Hills Academy. 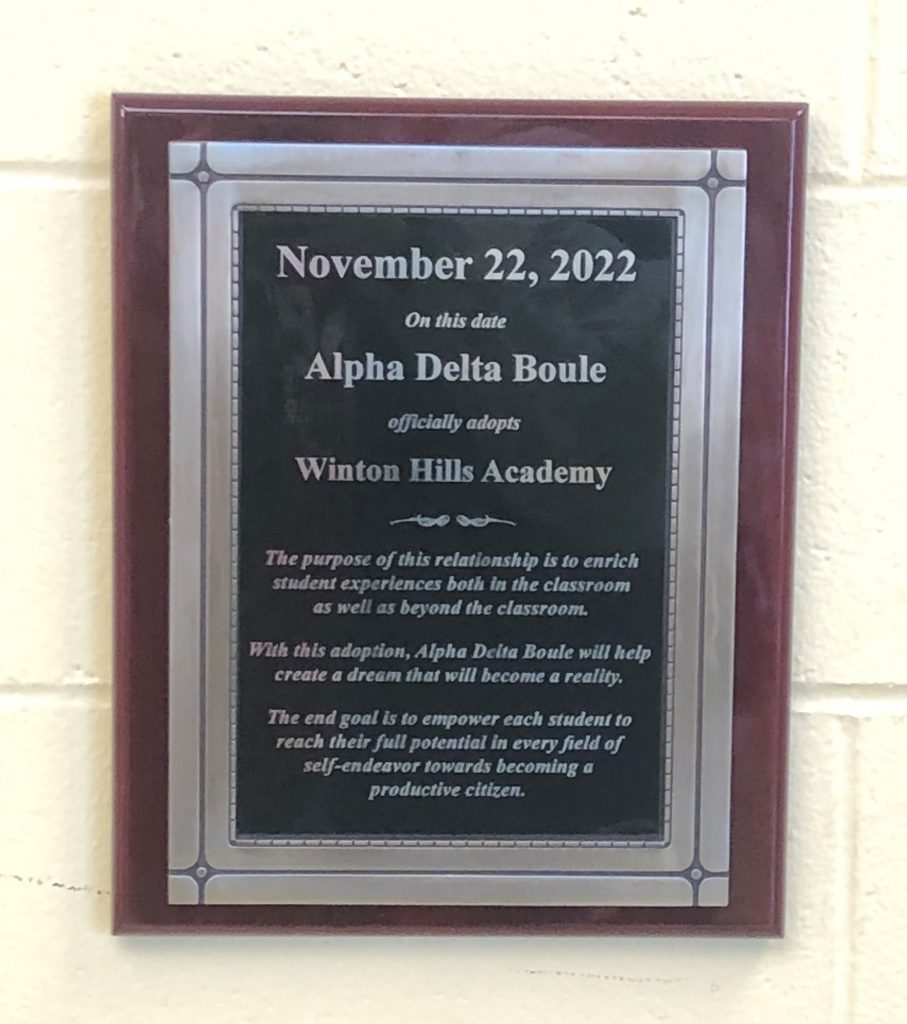 ABC is incredibly humbled to by the abundant support of Winton Hills Academy from the Greater Cincinnati Chapter of the Alpha Delta Boule. We are very grateful to have allies in the Cincinnati community like Alpha Delta Boule, who share our mission to provide opportunities for students in need.

And of course, we are grateful for Shelby Zimmer, our amazing Resource Coordinator at Winton Hills! Shelby helped foster and grow the relationship with Alpha Delta Boule, and is a valued advocate for the students of Winton Hills Academy.

The mentorship and guidance of parental figures can be profoundly impactful on the development of children. Studies have shown that more parental involvement can directly contribute to increased confidence, better communication skills, and positive cognitive and social adjustments. With this in mind, Shelby Zimmer, ABC Resource Coordinator at Winton Hills Academy, teamed up with Alpha Delta Boule (ADB) to create an event called Donuts with Dad.

The inaugural event took place in October of 2021, and the concept for the event was so popular, that all of the 50 registration slots were filled within four hours, and a second session was added. The first event was well received, with nothing but incredibly positive feedback from the staff, students, and parental figures.

After the success of the 2021 event, Shelby and the Alpha Delta Boule teamed up to bring it back for 2022, with one small tweak. Shelby and the ADB wanted to make an effort to include paternal figures such as grandfathers, step-fathers, and other men who have stepped up to mentor and inspire the children at Winton Hills. For this reason, the 2022 event was renamed Donuts With Dudes. 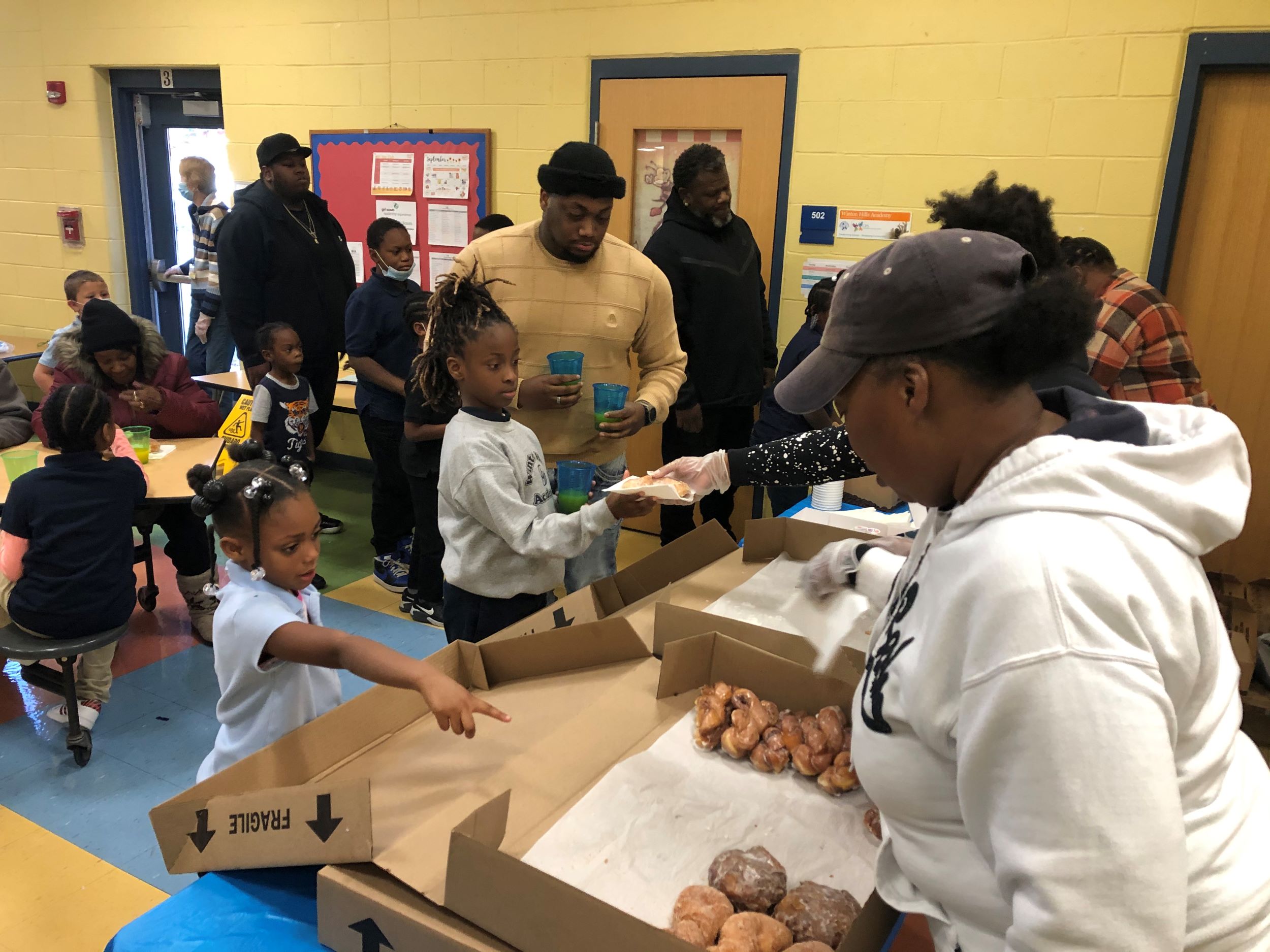 Upon arriving at Winton Hills for the event, students and their fathers chose what items they wanted for breakfast from a large assortment of Servatii’s donuts, juices, coffee, and water. After a greeting and introduction, the speaker took the stage.

The speaker for the Donuts with Dudes event was former linebacker for the Cincinnati Bengals, Joe Kelly. Born in south-central Los Angeles, Kelly shared the great amount of adversity in his life on his way to the NFL.

Kelly spoke of how his mother stressed the importance of getting an education, and would not let him participate in sports if he did not have the grades. Kelly stressed the importance of an education to the students, sharing how he utilized his education to start his own business, Kelly Youth Services, when his 11-year playing career came to an end. He encouraged the children to listen to the advice of their parents and paternal figures, and encouraged each to pursue their own dreams.

Kelly continued by speaking about the influence of caregivers, stating that the paternal figures in the audience can be more influential than any celebrities. He commended the paternal figures for their active attendance at the event, and commented on how excited the children were to see them arrive. Kelly stressed that little things like this can go a long way, and urged the adults in the audience to continue to support and be actively involved in the lives of their children. 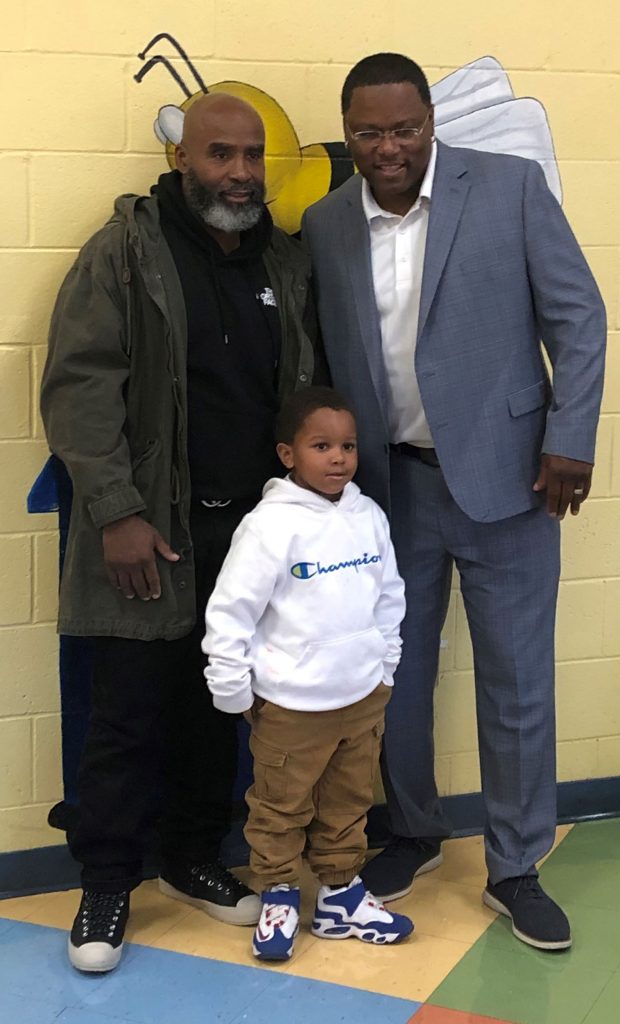 After he was done speaking, Joe Kelly cordially took questions from students before participating in a photo session with the audience. The high level of engagement from the students and the nature of their questions made it very clear that they had taken the messages from Kelly to heart. 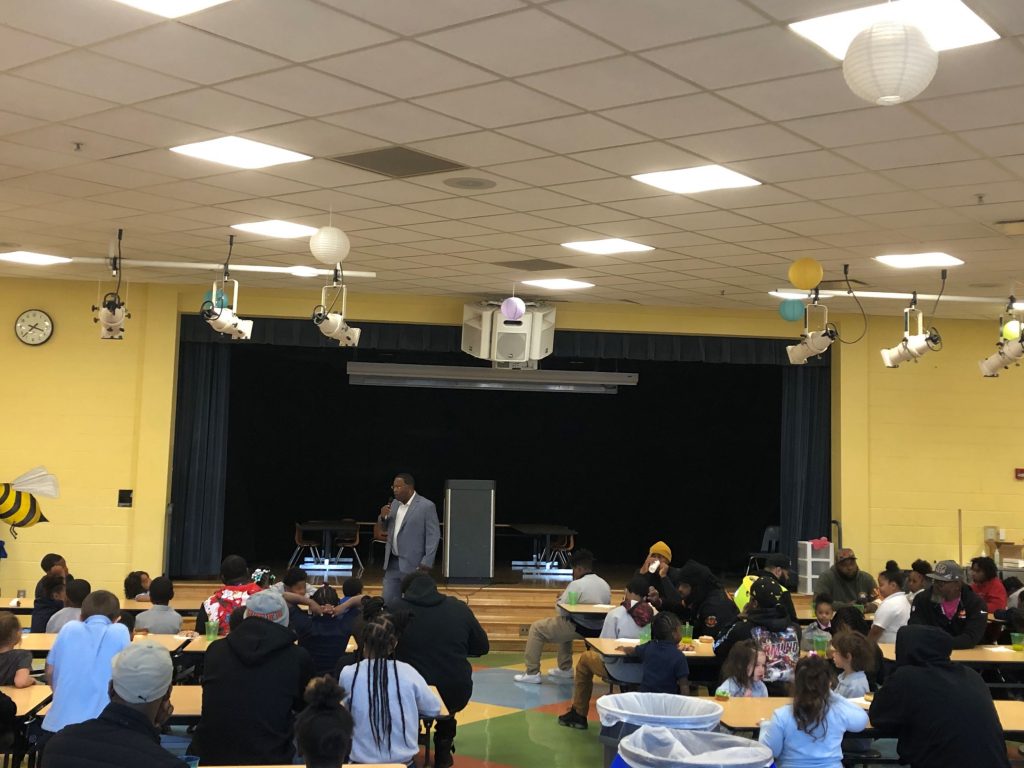 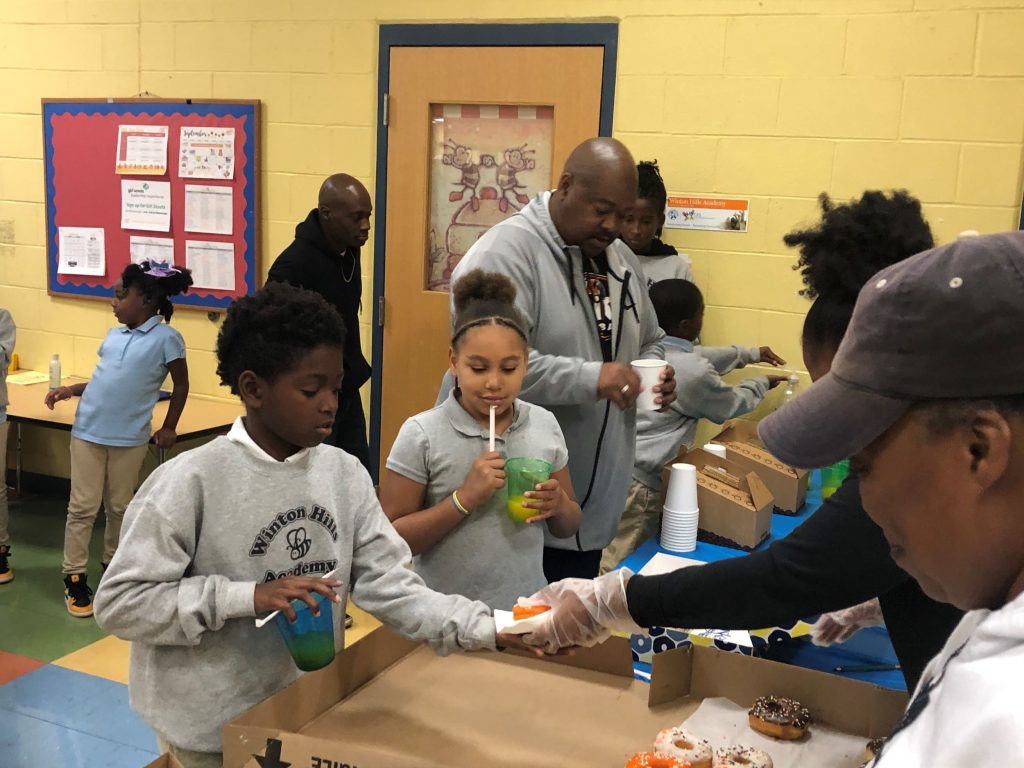 This event would not have been possible without the tremendous efforts of Coach Jim Anderson, Marty Dunn, and the Greater Cincinnati Chapter of the Alpha Delta Boule. Coach Anderson was vital in arranging Joe Kelly to speak at Winton Hills, and the Alpha Delta Boule supported the event financially as well.

We are also grateful for Shelby Zimmer, ABC’s resource coordinator at Winton Hills, who was vital in organizing the event. From helping organize the sign-up process, coordinating the staff at Winton Hills, and being the point-person to ensure that the event went well, Shelby did exceptional work in the organization of the Donuts with Dudes event, and we are incredibly grateful to have her on the ABC team.