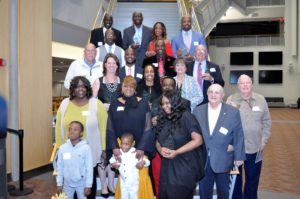 Working jointly with the Cincinnati Public School District (CPS), Activities Beyond the Classroom has played a big role in honoring the distinguished local athletes who have made a name for themselves over the years. To that end, on April 19 CPS will celebrate its rich athletic history by recognizing fourteen athletes and coaches as part of the 2018 Athletic Hall of Fame Class. These honorees are culled from sports as diverse as football, basketball, swimming, and tennis, and span the generational gamut, with the oldest member belonging to the Class of 1946, while the youngest comes from the Class of 2000.

“The Cincinnati Public Schools Athletic Hall of Fame has a special Selection Committee who assumes the responsibility of voting on all nominations on a year-by-year basis. Each Selection Committee member either represents a CPS school as an alum or has a demonstrated history and knowledge of high school athletics within the Cincinnati area,” says Josh Hardin, District Athletic Manager for CPS. “After detailed nomination forms are shared, each member will select who they believe deserves a bid. The athletes/coaches with the most votes at the end of the meeting being selected. All nominees are screened by the Executive Committee.” Each year, eight living athletes, two coaches, and four deceased athletes are selected to be inducted into the CPS Hall of Fame.

“Cincinnati Public Schools has an incredibly rich history in regard to culture, academics, and athletics. Students and coaches that contributed to success and transformation of athletics in any and all capacities deserve to be recognized and CPS Athletics takes tremendous pride in inviting these model citizens back to the district,” says Hardin. “Current students can look up to these former athletes/coaches knowing that they were once in similar situations and circumstances. We believe it is very important for successful CPS alumni to remain involved with the district as mentors and liaisons, as well as motivators in order to grow the youth of today.”

Regardless of which teams you follow or what sports you enjoy the most, all students and mentors who excel in the field of athletics deserve recognition. Their efforts are an inspiration to current and future generations, so it makes sense for a nonprofit as dedicated to extracurricular activities as ABC to endorse and support such initiatives. This makes the 2018 CPS Hall of Fame ceremony a must-attend event for anyone interested in Cincinnati sports, and a harbinger of more good things to come out of this organization.

Seeking to expand students’ horizons is always a noble pursuit, and few organizations have done more in this regard than Activities Beyond the Classroom, a nonprofit organization based in Cincinnati. Since 2004, ABC has been a worthy ally to any student who wishes to make the most of his or her youth. In fact, an estimated 15,000 public school students get to participate in one or more of the 200 extracurricular programs and activities organized by ABC every year.