Through Activities Beyond the Classroom’s partnership with Tennis For Charity, ABC was presented with an opportunity to expose students to professional tennis at the Western Southern Open Kid’s Day on Saturday, August 11th. 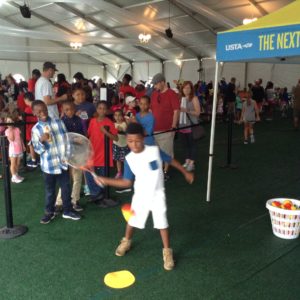 15 youngsters participated in the Kid’s Day festivities as a result of the collaborative efforts of Activities Beyond the Classroom and Tennis for Charity. Of the 15 students, 4 students were from Oyler School and 11 students were from Roll Hill Elementary. Adult chaperones included volunteers from community organizations, including GRAD Cincinnati, Amicus Childcare Learning Center, and Santa Maria Community Services.

ABC first launched its tennis program in 2014 in an effort to help teach Cincinnati Public School students valuable life lessons through the sport of tennis. Players actively learn about sportsmanship, teamwork, perseverance and determination in a fun and safe environment. The tennis program is taught through Physical Education classes as well as through ABC’s after school tennis programming. 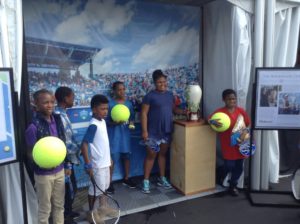 The young tennis enthusiasts who attended Kid’s Day were able to interact both with the sport of tennis and with professional tennis players. In most instances, the pros have had to overcome their own personal obstacles in their quest for greatness. The students even got to meet Stan Wawrinka, aka “Stan The Man”, a Swiss tennis player who according to The Economist is “Tennis’s great latecomer” (The Economist September 12, 2016). Stan Wawrinka’s philosophy on perseverance is evidenced by his catchphrase “Ever Tried. Ever Failed. No Matter, Try Again. Fail Again. Fail Better.” (http://www.stanwawrinka.com/).

Certain lessons, such as those taught on the tennis court, are best received when taught through hands-on experiences that go beyond the classroom. Teaching young people to overcome obstacles is a lesson that can serve students throughout their academic and professional careers. The collaborative effort of the organizations involved helps to create a thriving community by giving rise to youngsters armed with the resilience and grit required to face life’s challenges head-on.