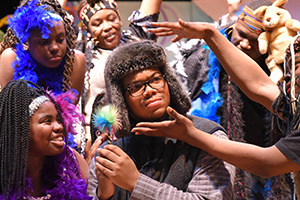 ABC’s Resource Coordinator at Aiken New Tech High School, Dana Bierman, was the first to tell us about a stand-out sophomore at Aiken, Keshawn Townsend. Like many CPS students involved in ABC programs, his story is one that needs to be shared.

Keshawn Townsend, a rising junior at Aiken, was first placed on our radar thanks to a unique opportunity to travel abroad as a participant in the International Congress of Youth Voices. As we explored, we quickly learned that Keshawn possesses many talents and has the propensity to have a meaningful impact, quite possibly on a global level. Keshawn has many interests including poetry, theatrical production, culinary arts, aerospace, robotics, and education. Though his interests display a ton of potential in their own right, it was his passion for solving social justice issues that really stood out to us.

As a young child, Keshawn was raised by his grandmother and great grandmother. He began living with his extended family at three years old, and is the oldest of seven children. During his elementary school years, he found himself getting into frequent trouble. According to Keshawn, “I was acting out because I wanted attention.”

Keshawn began attending Aiken in the 7th grade and at this pivotal point in his young life, he decided to change. Keshawn decided that he wanted to be an inspiration for his younger siblings. Driven by his desire to inspire his three younger brothers and three younger sisters to achieve greatness, Keshawn began setting daily self-improvement goals. As the oldest brother, he realized that his younger siblings look up to him, so he pushed himself to change his behavior. “I set the bar high so [my siblings] can reach their fullest potential.” Keshawn added, “As a result, I find myself exceeding the goals I set for myself on the daily.”

Keshawn began writing poetry in the 5th grade as a creative outlet. “At the time I was living with my grandma. She had broken her femur and was in the hospital for a few months, followed by an extended stay at a long term care facility. My grandmother was very strict. While she was in the hospital I went to stay with my Aunt, where I was given way more freedom, including walking to and from school. I started having anxiety so I used writing to help me calm down.”

After his grandmother returned home, Keshawn didn’t write any poetry for a few years. However, during his 8th-grade year at Aiken, Word Play Cincy came to his classroom and presented him with his first opportunity to perform his poetry. Word Play Cincy is a Cincinnati-based organization with the mission to “help young people fulfill their potential by discovering, honoring & sharing their voices through reading, writing & storytelling.” (Source: Word Play Cincy).

Keshawn quickly fell in love with performing poetic verse. Thus, he was excited when Word Play invited him to attend a summer camp where he was afforded even more opportunities to perform his poetry. “My first performance was for a small community event held in a garage. I performed in front of a very small crowd, so I was a little less nervous. From there, I was eager to do more performing so I began writing every day and performing regularly.”

According to Keshawn, most of his poetry centers around civil rights, Black Lives Matters, and relationships.  Because he has lived in poverty and had to deal with social justice issues for his entire life, Keshawn tends to be very vocal on his opinions on these topics.  He attributes his writing style to the legendary Dr. Maya Angelou. Keshawn applies one of her repetition techniques where she speaks about the past, present, and future simultaneously. In this video, he performs an original work of poetry, titled “Shade,” at a commemorative celebration on Martin Luther King, Jr Day in 2018. His performance was so well received that he got a standing ovation from the audience! (Source: Word Play Cincy YouTube Channel).  You can check out Keshawn reciting his poem on Martin Luther King Jr. by clicking the link below.

Performing poetry led Keshawn to further explore acting and singing. When Jumpstart Theater came to Aiken, Keshawn was afforded the opportunity to add acting to his repertoire. Jumpstart Theater is an initiative to aids schools, like Aiken, in forming a musical theater program (Source: Children’s Theater of Cincinnati). Keshawn auditioned for a secondary role, yet he was given the leading male role of Papa Ge in the stage play “Once on This Island”. Since then, Keshawn has performed in two additional musicals at Aiken, including “Dr. Seuss the Musical” and “Hairspray,” where he faced the challenge of portraying a woman named Edna Turnblad. 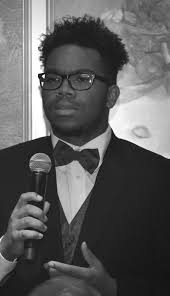 Towards the end of the 2018-2019 school year, Keshawn received an invitation from the International Congress of Youth Voice. Keshawn, amongst other young writers, was invited to travel to Puerto Rico in August of 2019. Shortly after receiving the invitation to go to Puerto Rico, Keshawn was also awarded the Global Citizen Curtis Scholarship for 2019. The Curtis Scholarship includes an all expenses-paid trip to South Africa.  This meant Keshawn had to make a tough decision and choose between the two opportunities to travel overseas. Because of his passion to address issues of social justice and gentrification, Keshawn opted to accept the Curtis Scholarship and will soon be traveling to South Africa.  He felt strongly that the mission of Global Citizen Curtis Scholarship more closely aligned with his own personal values.

The Global Citizen Poverty Project has a goal to eliminate extreme poverty by 2030 (Source: Global Citizen). Global Citizen focuses on areas such as education, food, hunger, access to water, and sanitation. As part of the trip to South Africa, Keshawn and other awardees will meet with various organizational leaders to learn what avenues the leaders have used in their attempts to alleviate poverty, and how these solutions can help Keshawn address poverty issues here at home.

In the Fall of the 2019-2020 school year, Keshawn will return to Aiken High School, having seen other parts of the world. Keshawn hopes to apply what he learns in South Africa locally and impact the lives of Cincinnati residents experiencing poverty. ABC is extremely excited to see how this experience shapes his future choices and the path that lies ahead for Keshawn.