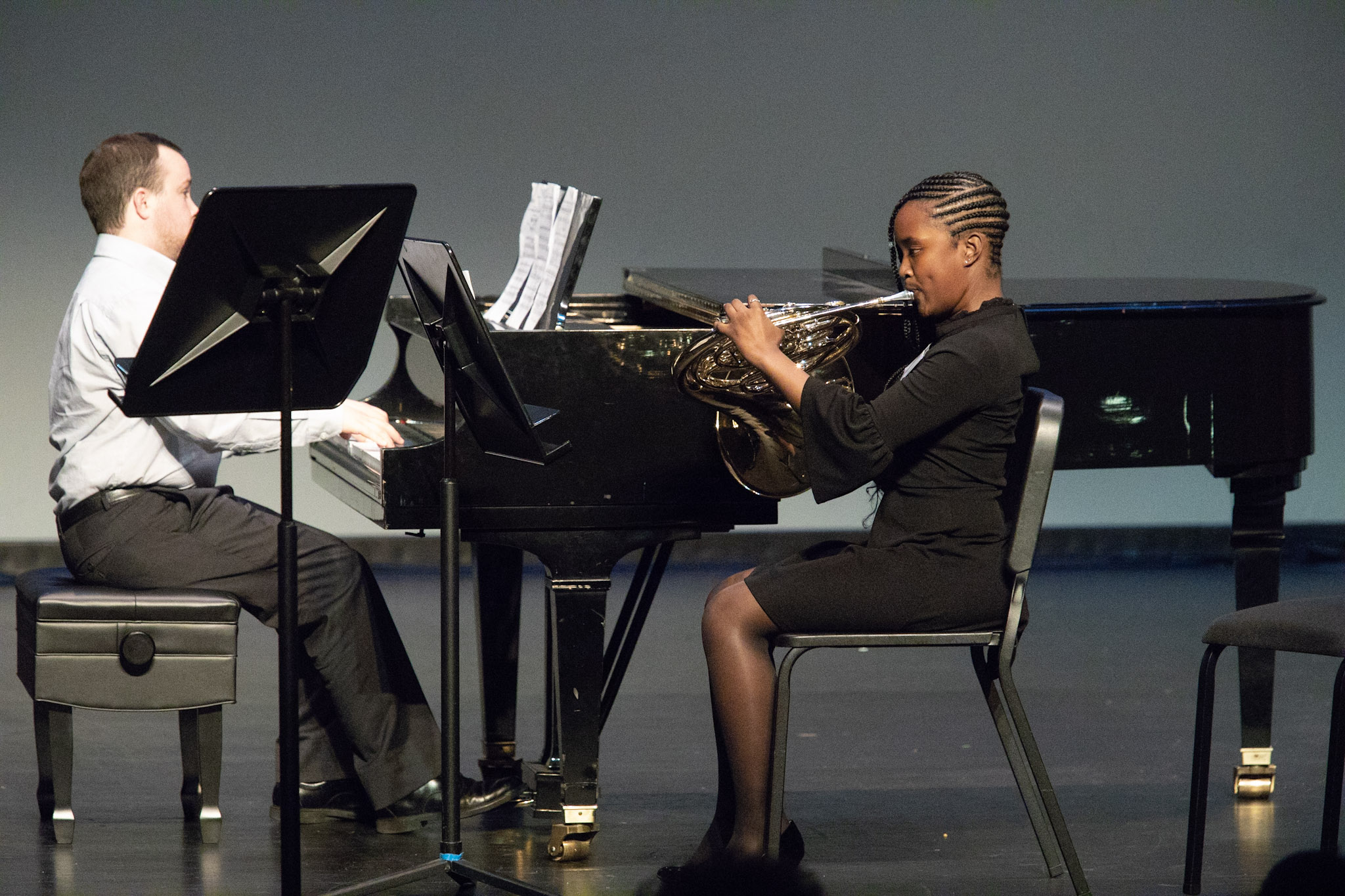 High school junior Shawnta Hunter is a multi-talented Instrumental Music major at School for Creative and Performing Arts (SCPA).  Her performance career began when she was a 4th grader; at SCPA 3rd grade students are required to audition for each major prior to the beginning of their 4th grade school year.  Shawnta was shocked when she learned that she was selected as a Band major.  Shawnta played the trumpet in the band for the first five years of her musical career.

When Shawnta began 9th grade, she transitioned to the French horn, “It was right around the same time I got my braces,” added Shawnta.  When asked what it was like switching from trumpet to French horn, she replied, “at first, it was crazy.  The intervals are very different.  It was a big change for me.  It was hard, but I finally got the hang of it.”

Shawnta’s band teacher recognized her raw talent and recommended that she pursue private lessons.  As a result, she got connected with the Ben Carlson-Berne Scholarship Foundation (BCB).  BCB helps young students interested in learning classical music by providing private lessons with musical performers. BCB is a non-profit organization named in honor of the late Ben Carlson-Berne, a young classical music enthusiast who gave lessons to disadvantaged youth in his free time.  Today, the organization provides music lessons to students beginning in 6th grade, with a commitment to continue those lessons through graduation as long as the young musician displays interest.

As part of her involvement in BCB, Shawnta has been taught by two renowned musicians during her early high school years.  Her first professional instructor, Patrick Hoege, taught her the fundamentals of playing French horn. However, after her freshman year, Hoege moved away from the Cincinnati area.  Upon his departure, she was assigned to a new instructor, Jessica Pinkham.  Beginning in her sophomore year, Pinkham began providing Shawnta private lessons.

Jessica Pinkham plays second horn in the Dayton Philharmonic Orchestra.  Pinkham obtained her Masters of Music from SMU, Meadows School of the Arts (Dallas, TX).  In an effort to pair each student with a highly skilled instructor, the Ben Carlson-Berne Scholarship Fund partners with Concert Nova to find instructors.  Activities Beyond the Classroom, who serves as the fiscal sponsor for BCB, handles the day-to-day management of the organization’s funds, allowing the Executive Director, Susan Carlson, to focus her efforts on finding opportunities for student musicians like Shawnta and educating the community about the importance of classical music instruction.

Recently, Shawnta participated in the Inaugural CPS International Jazz Festival, presented by Activities Beyond the Classroom.  This amazing event took place on Saturday, October 5th at the Aronoff Center for the Arts.  The citywide music festival provided a platform for student musicians, professional artists and internationally renowned musicians from around the globe to bring their talents together.  Shawnta was among the 250+ CPS student musicians who participated in a day filled with educational sessions, student workshops, clinics, master classes and finale performance wherein 700 attendees were treated to an evening of artistic expression in the form of jazz music.

“The experience was amazing! It was definitely a game-changer for me because jazz is something I enjoy, but it’s something I’m still getting used to. My nerves were through the roof, but when you’re playing jazz, it just has this inviting feel, so once you start to play you get more and more comfortable. I’ve participated in plenty of festivals, but they’re always classical, so doing this helped me step outside of my comfort zone. It’s definitely something I would want to do again!”

Shawnta enjoys playing both classical and jazz music.  She enjoys all genres of music, but she is particularly fond of R&B and soul.  Because of her jazz background, she often finds herself mimicking music she hears on the radio.  Of course, she puts her own spin on it; this technique known as improvisation is a spontaneous invention of melodic solo lines and accompanying parts.  Outside of school and music, Shawnta works as a stand supervisor at the Larosa’s in Kings Island.

Shawnta encourages young musicians and music enthusiasts to continue practicing.  “Keep going with the lessons.  You will get better, so don’t give up. ” Having someone like Pinkham pushing her to continue to improve helps boost her confidence, and gives her the courage to keep going.  Shawnta attributes her rapid development as a musician to the extra time she and Pinkham spend practicing over the summer months, made possible by the tremendous work of the Ben Carlson-Berne Foundation.