Five students at Winton Hills Academy can now add the title “published author” to their list of accomplishments. The youngsters, who are currently in grades 5 – 7, co-authored the story of Misunderstood Micah, an anti-bullying tale. 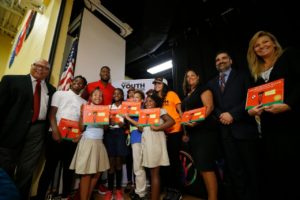 Activities Beyond the Classroom’s Resource Coordinator, Shelby Zimmer, learned about the national book writing competition through her community partnerships and encouraged the students to submit their story to the National Youth Foundation. National Youth Foundation’s goal is to enrich the lives of children through creative educational programming. Their annual book writing competition, Student Book Scholar Contest, is designed to give young writers a voice and provide a platform that celebrates youth literacy.

The story submitted by the students at Winton Hills Academy was one of 75 entries from students across 20 states. Each story was judged by professional athletes from the NBA and NFL. As winners of the contest, the team of students will receive a cash prize of $500 and copies of their published book. The books will also be donated to schools and libraries nationwide. National Youth Foundation is currently working to allow the general public to purchase copies of the book as well.

A special surprise assembly was called at Winton Hills Academy on Tuesday, September 18, 2018. The students did not know that their book had been selected or even why the assembly had been called. “The book was submitted late last year and judged over the summer. The students would periodically inquire about the book’s status and ask if we had heard anything,” said Zimmer, who managed to keep the foundation’s decision a secret for several weeks. “The best part was getting to see their faces as their names were called!” added Zimmer.

The story Misunderstood Micah, is told from a unique perspective, that of the bully. Micah’s story challenges the reader to look beyond a person’s actions and attempt to understand what a person may be going through. According to the student authors, there may be an underlying reason for the bully’s action that is unknown.

Carlos Dunlap, defensive tackle for the Cincinnati Bengals, attended the assembly and helped celebrate the student’s achievement. During the assembly Dunlap autographed copies of the book for students in attendance. According to his Twitter FeedDunlap marked the festivities as the kickoff to his 2nd annual Anti-Bullying Tour.