Since their inception in 2006, CAMP (Cincinnati Architecture Mentoring Program) has worked with over 500 8th and 9th grade scholars throughout the region, opening their eyes to the world of architecture, design, and planning.

Activities Beyond the Classroom is proud to be the fiscal sponsor for CAMP, allowing the program directors to focus on the program while ABC manages the administration and overhead.

Over the summer, ABC caught up with CAMP directors to learn about their program and summer camp opportunities.

CAMP is a collaborative effort of University of Cincinnati’s DAAP School of Architecture and Interior Design (SAID), the American Institute of Architects, and the National Organization of Minority Architects.  CAMP’s immersive summer camp experience helps bring the world of design to life for area youth.  One of the main goals of CAMP is to diversify the field of architecture, opening doors for children who normally might not think of it as a career option.

During the week-long summer camp, students spend time exploring the world around them, while discussing and learning about the many facets of design and planning from industry professionals and seasoned educators.

Getting The Word Out

Students who live in the Greater Cincinnati area are invited to take part in the hands-on program.  Of the students who attended the 2019 CAMP, most first learned about the program from their school counselors and advisors, though some heard about it from their parents, and others found the information online.

According to Michael Burson, one of the industry professionals that works with the students at CAMP, participants from all over the Tri-State area travel to UC’s DAAP Center to take part in the summer camp. “Our goal is to expose more minority students to the field of design,” stated Burson.

Quinten, an 8th-grader who attends Walnut Hills High School, received encouragement from his mother to attend CAMP. Though reluctant at first, his father Mike Curry teased, ”he wasn’t too sure what to expect at first. Although he is really interested in art, his true passion is soccer.” At first, Quinten was afraid that attending the CAMP would cause him to miss out on soccer camps. However, after the first day of CAMP, he was thrilled to have the opportunity to learn and explore his artistic side. “It was really fun. It was challenging, but fun,” added the rising 8th grader.

During our visit, we also met Annie, an 8th-grader at Mason High School. Annie’s father, Jun, who works as a structural engineer, insisted that attending CAMP was all Annie’s idea. “We didn’t tell her to do anything. She likes drawing and putting things together.“

A Week of Summer Fun

When students arrived at UC’s campus on Sunday, July 7th, they received the itinerary for the remainder of the week.  It included field trips to Smale Riverfront Park, historic Findlay Market, and the Cincinnati Zoo and Botanical Gardens. During each trip, students learned about the different aspects of designing structures, infrastructure, and how each design must take into consideration various perspectives, including all intended users and the impact one design has on the surrounding area.

While at the Cincinnati Zoo, students attended behind the scenes tours, encounters with zoo animals, a construction area, and site visits to various kiosks around the award-winning zoo. The students were broken up into teams, assigned an animal, and tasked to design a new and innovative Animal Encounter for their creature(s). Among the animals assigned to the teams were the Lemur, Mountain Goat, Pangolin, Fennel Fox, Pig, Sloth & Macaw (combined), and the Llama.

Students had to learn about the animal’s needs and lifestyle in order to create a suitable structure to house them for viewing at the zoo. Students also had to take into consideration zoo visitors and their needs, including accessibility and spaces to congregate, rest and consume food.  Lastly, the teams  had to examine and consider the needs of the zoologist and botanist who work at Cincinnati Zoo. Each team was assigned a theoretical plot of land, and instructed to make sure their habitats were in line with the Zoo’s overall mission of conservation, and also make sure the habitats fit into the Zoo’s landscape and overall aesthetics.

Exhibition Hall For Friends and Family

On Saturday, July 13th, there was a special celebration that concluded the 2019 summer camp experience. As campers and their guests arrived, they were free to explore the gallery, seeing the various structures created by the young architects-in-training. The exhibit hall offered attendees an opportunity to learn about and appreciate the creative works on display. 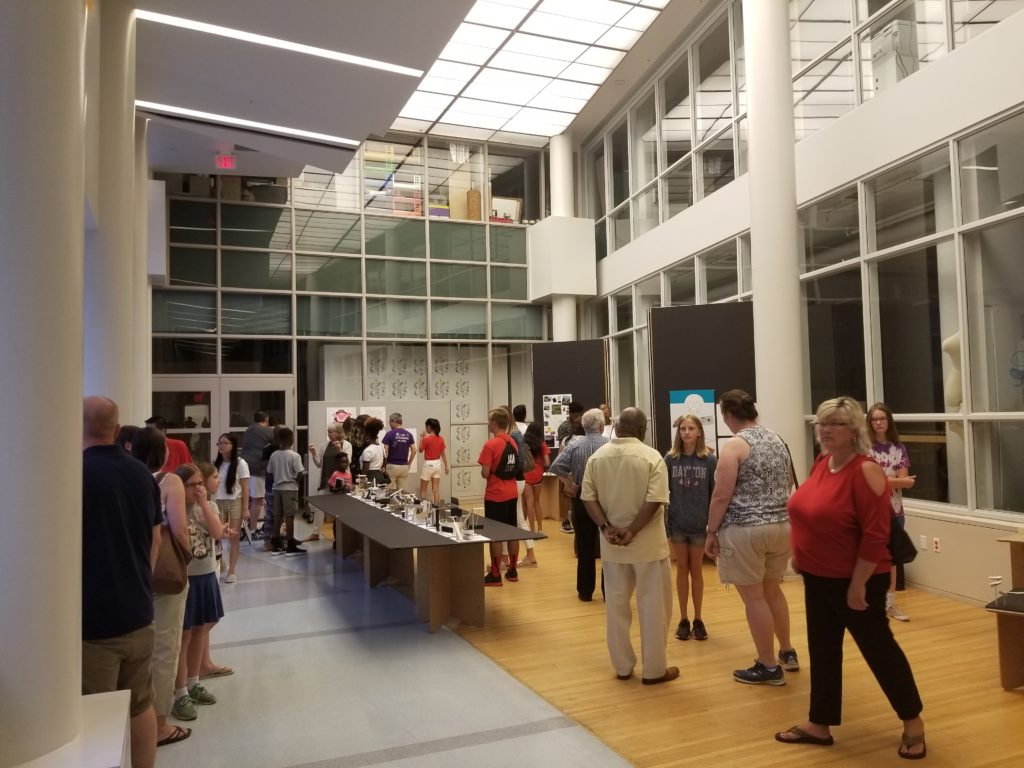 One of the walls was dedicated to the 100+1 Design Exercise, a “mystery box” challenge where campers were given a box containing a single building material, and then tasked to come up with a design concept. Among the materials were everyday household items one might find in their kitchen pantry; items such as plastic utensils, pasta noodles, and paper products including coffee filters, paper cups, and more. The inventive young minds of the campers were able to come up with a wide variety of structures.

The exterior wall of the exhibit hall included dioramas of the various animal habitats that the campers created for their respective zoo animal. In the center of the exhibit hall was a display of multi-dimensional planes, featuring structures that could easily be seen as futuristic lofts for interplanetary living quarters. For this exercise, the students worked in teams, helping them build their 21st Century skills by working collaboratively with students from various schools and backgrounds.  In addition to team-building, students were also encouraged to channel their creativity and critical thinking skills.

When asked why he felt teaching architecture and design to 8th and 9th grade students is important, Burson stressed the importance of teaching these “soft skills” to children at this pivotal cognitive level. “In construction, you have to work as a team. Each player relies on each other to get their job done. The architect must rely upon the builder to bring their design to life, the builder relies upon the plumber, the carpenter, electrician, and the laborers to complete the project, and so on.” According to Burson, “there are few occupations like construction, where you are forced to rely upon your teammates day in and day out.” 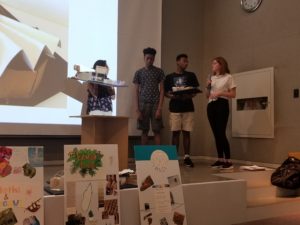 During the final presentation, each team was invited on stage to discuss the design elements of their animal habitats,  tell how they came up with their design concept, and explain how each structure addressed the needs of the animals, visitors and zoo staff.  Many of the campers indicated that the zoo visit was their favorite part of the summer camp experience. Annie, the 8th grader from Mason High School, stated that she really enjoyed having to “think outside of the box.” She went on to add that her favorite part was “getting to work with people that I didn’t know, and finding ways to include everyone’s ideas in the final design.”

For many of the campers, the chance to attend CAMP’s summer program has opened their mind to a potential career in the field of architecture and design. One student even shared how the summer camp helped her refine her career choice. Edi, a student at Clark Montessori stated, “after this camp, I learned that I am more into interior design than designing buildings.” Whether these promising students go on to design the next big skyscraper, or choose a different career path, Activities Beyond the Classroom is proud to give them opportunities to try new things and learn more about the world around them.

The need for diversity

During the exhibition, the campers, their family members, volunteers, and community partners (including ABC’s Content Developer) were guided into the auditorium of the DAAP Center, where they learned about the critical need for more minorities in the field of architecture. According to the National Organization of Minority Architects, only 2% of licensed architects in the US are African-American. Guests heard from David Ricketts, a 2017 Tuskegee University graduate, as he shared his experience working in the field as a Project Coordinator for R.W.A. Architects in Cincinnati. Ricketts stressed that the students are at an appropriate age to aspire for a career in architecture. According to Ricketts, “I was in the 8th grade when I decided that I wanted to become an architect.”

If you’d like to learn more about this program, or know a good candidate, visit the DAAP camp site and keep an eye out for next summer’s opportunities.

Special Thanks to CAMP’s Sponsors and Individual Donors: